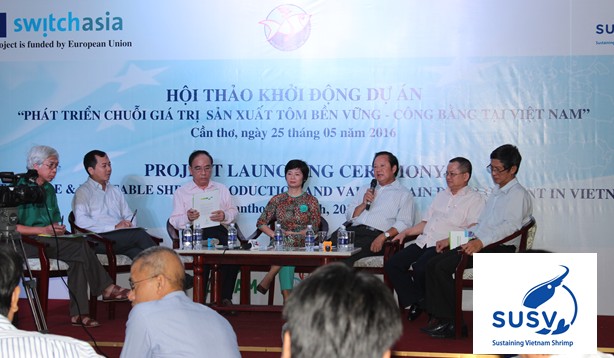 Workshop on project of sustainable and equitable shrimp production and value chain development in Vietnam was jointly held by Oxfam and the International Collaborating Center for Aquaculture and Fisheries Sustainability (ICAFIS) under Vietnam Fisheries Association on 25th May 2016 in the city of Can Tho.

Attending the workshop were more than 200 delegates from management agencies under Directorate of Fisheries, the State Bank, the Department of Agriculture and Rural Development in Soc Trang, Bac Lieu and Ca Mau, Vietnam Fisheries Association VASEP, businesses, cooperatives and farmers.

Brackish water shrimp is the main cultured species of the fisheries sector is important. Over the past 10 years, the shrimp industry has maintained a high growth rate of 8.8% / year and become an important livelihood for about 1 million people, of which over 80% are farmers and created more than 3 million jobs in the seafood processing plants and relevant services.

However, due to rapid growth in both area and production of shrimp industry which depends on marine ecosystems, over the past few years the shrimp industry has faced many challenges knowledge towards sustainable development and efficient. In recent years, spontaneously development and unplanned of shrimp farming have affected the environment, product quality, economic efficiency. Also, links between farmers, buyers and export processing enterprises were loose and farmers faced difficulties such as disease, quality of seed, feeding, and the impacts of climate change, drought and saline intrusion.

In 2015, seafood exports in general and shrimp export in particular faced challenges. Shrimp export value plummeted by more than 25% compared to 2014, reaching US$2.95 billion. The year of 2016 is forecast to be better in 2015 due to positive effects from the new trade agreements such as TPP and FTA. In the first 3 months of 2016, shrimp exports reached more than US$619 million, up 7. 88% compared to 2015. However, in 2016 shrimp exports will be affected by the downward trend of price, competitive factors, trade barriers and high requirements for products quality on the world market.

The project set out 4 specific objectives: 1/promoting shrimp producers and processors to apply p-SIA (Participatory Social Impact Assessment), B-EIA (bio-environmental impact assessment) ASC (Aquaculture Stewardship Council) and social responsibility standards; 2/promoting access to finance and improve production efficiency through the application of advanced production management practices, and efficiently use natural resources such as energy and water; 3/ empower to small-scale producers so that they can better organize and improve the collective role in giving comments on the government and other factors of the value chain; 4/ promote policy on promoting credit according to value chain model integrated production criteria and sustainable consumption.

The project, which is funded by the European Union with capital of more than Euro 2.5 million, will be implemented in 4 years from March 2016 to February 2020 in the three provinces of the Mekong Delta's Soc Trang, Bac Lieu and Ca Mau by ICAFIS and Oxfam. According to the project coordinator, the project will promote cooperation, equitable benefit sharing between the parties in the value chain, especially small-scale shrimp farmers. The participation of the parties will create conditions for the people of the shrimp farming areas to have the opportunity to dialogue with shrimp farmers and stakeholders in order to control and manage the negative impacts on the environment and society.

At the workshop, many participants expressed their opinions on the status of development of the shrimp industry as well as proposed measures to implement effectively the project’s objectives. Also, the partners and fisheries management agencies of the three provinces participating in the project signed a commitment to implement successfully this project.