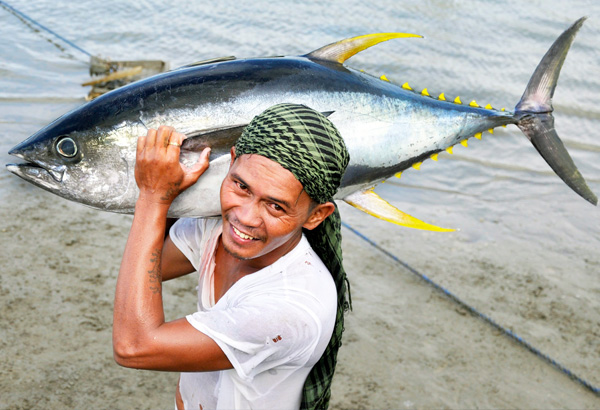 The signing was held during the municipality's Fishers' Day, which saw local fisherfolk take part in a fishing competition and a cook-off as part of the annual weeklong town fiesta. May is also the Month of the Ocean in the Philippines by virtue of Presidential Proclamation No. 57 signed in 1999 by then President Joseph Estrada. The initiative was made possible through a grant from the SEPS WISIONS for Sustainability of the Germany-based Wuppertal Institute.

The solar-powered system will store power generated from the sun during the day, and will power energy-efficient LEDs to illuminate fish landing activities in the San Jose Port by night. "The innovative lighting systems we'll be using enhances the productivity of the tuna supply chain which begins here in San Jose. Of course, it will also generate energy savings," says Philips Country Manager Fabia Tetteroo-Bueno.

The carbon footprint of handline tuna, which promotes small-scale fishing and is already small due to its low overall environmental impact, will be further reduced by the use of renewable energy plus the use of energy-efficient LEDs. "The process of generating solar-powered energy is carbon-free. The shift to renewable energy solutions reduces fossil fuel dependency while encouraging the economic development of local industries," declares WWF-Philippines Climate Change and Energy Program Head Atty. Angela Ibay.

"This will encourage fishers to use the port area where we can centralize fish landing activities. We also plan to have the tuna buyers set up at the port, for it to become a one-stop shop for both tuna fishers and buyers,” says San Jose Mayor Antonio Chavez.

Centralizing landing activities in one area will also be a boon to the DA-BFAR National Stock Assessment Program, which collects fisheries resources data around the country's fishing grounds to enable the development of sound fisheries management policies.

The installation of the solar lighting system is expected to be completed by the 4th quarter of the year.

Image: A 42-kilogramme yellowfin tuna (Thunnus albacares) is the prized catch of this fisher from the Philippines.