However, market access is still the biggest challenge for Vietnam shrimp industry. Reviewing the market trend in recent years, market has fluctuated strongly. Shrimp industry had strong growth rates from 2010 to 2014, the exporting revenue increased from 2,107 million USD to 3,953 million USD. In 2015, the shrimp exporting revenue not only decreased 1,023 million USD but the market also shrunk one third (shrimp were exported to 92 countries in comparison with 150 countries in 2014. Exporting revenue also decreased in most market such as 35.4% in US, 18% in EU, 22.8% in Japan, 17% in China.. (source from VASEP)

ASC standard is the most important standard for Vietnam shrimp to access to the Europe and Japan market… which have been the main market for Vietnam shrimp. In recent two years, the project “Sustainable and Equitable Shrimp Production and Value Chain Development in Vietnam” funded by EU and co-implemented by ICAFIS and Oxfam in Vietnam collaborated with WWF Vietnam and local partners to facilitate 15 linkage contracts of applying ASC standard, buying and exporting ASC shrimp.

However, There have not been a final ASC standard for producer groups yet so applying and auditing ASC is still based on the general ASC standard requirements (big farms have applied). But a lot of requirements are not suitable for small-scale farmers who often have small and fragmented farms, that’s why it becomes the challenges for applying ASC standards as well as maintain linkages.

In order to untangle ties for companies and shrimp farmers in apply the standard and maintain the linkages. On Feb 22, 2018, the management board of project SUSV (Oxfam in Vietnam, ICAFIS) collaborated with WWF Vietnam, Control Union to co-organize the workshop “ASC standard updates for shrimp farmer groups/cooperatives and processing – exporting companies”, the workshop introduced the ASC standard for multi_site with the new requirements in comparison with the single-site ASC standard which big farm and companies had applied since 2014. 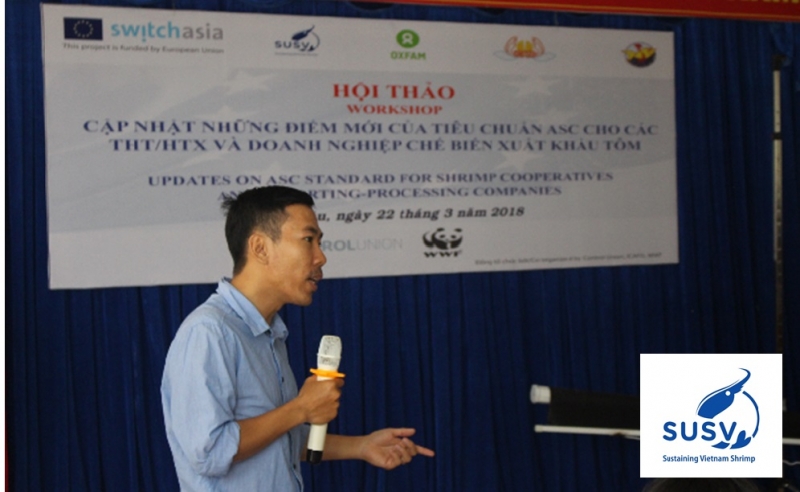 The discussion section received active and full participatory from attendants, especially representatives from companies. The discussion subjects focused on the challenges and difficulties which companies and small-scale farmers face both in technical requirements and internal management system requirements of multi-site ASC standard certification. 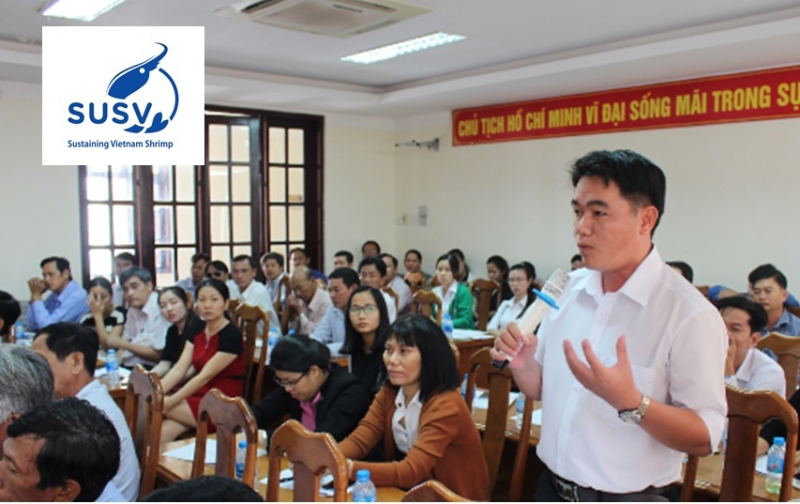 At the end of the workshop, participants highly appreciated the quality as well as the timeliness of the workshop, especially in the period, the shrimp processing/exporting companies and farmer groups/cooperatives are promoting linkages which apply ASC. The workshop participants expected the SUSV project and Control Union to conduct training on internal auditor to help shrimp farmer groups/cooperatives to apply multi-site ASC standard.

After attending the workshop, some companies and farmer groups/cooperatives planned to register ASC to conduct ASC auditing in the first and second Quarter of 2018 to get ASC certification soon.