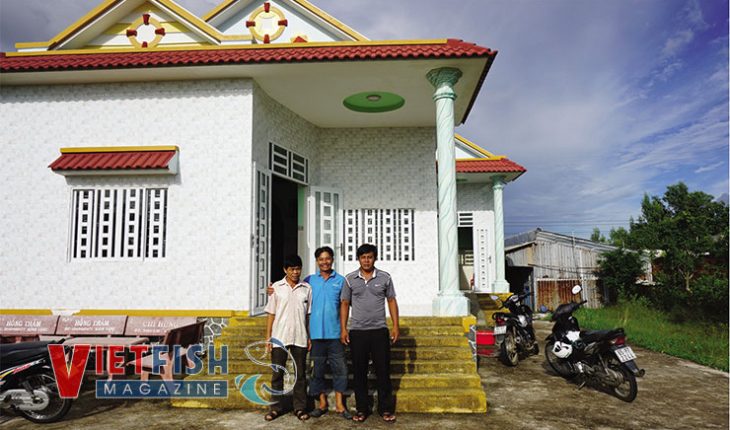 Ngọc explained that the forerunner of cooperative was established in 2012 with 14 members, all of whom are migrants from Hải Hậu district, northern province of Nam Định. The members then increased to 18 people. Mr. Ngoc pridefully said: “the migrants used to be so poor back then but now, there isn’t a poor household left in the cooperative”. He stated that, at the end of 2012, despite being newly established, all the members of the cooperative were very enthusiastic to participate after hearing about SUSV’s project and being given training in clean shrimp and forest shrimp farming technique and shrimp farming by ASC standard.

Speaking of the benefit of joining SUSV’s project, Thái Xứ Cơ, a member of Cooperative 30/4’s Management Board, gaily continued: “The members were given training in clean shrimp farming technique and got to study knowledge of sustainable aquaculture. Especially, as we were given favorable conditions in connecting with enterprises that supply the input and consume the output, the rate of successful shrimp farming is always high. Particularly, it’s the vital role of ICAFIS in forming the clean shrimp farming value chain linkage to promote Vietnam shrimp”.

Cơ said: “When the project introduced us to enterprises, the members were excited yet worried. We were excited that we were given the chance to conduct businesses linked to the chain, which was our strong desire, but worried because we didn’t know how to collaborate with them. Thus, initially, our cooperative didn’t sign up immediately but went through many discussions to debate on the terms in both input and output linkage. We simultaneously implemented and studied and discussed for a mutual goal. Only after achieving consensus, did we sign the contract.”

The most visible and timely result was that the members were equipped with shrimp culture knowledge meeting the market’s demand. Not only do they have a grasp of the farming technique but they are also able to culture following the process to acquire shrimp products that meet the P.O of enterprises and markets in order to make the sale go smoothly. Thanks to the project, the members of Cooperative 30/4 are well equipped with knowledge of culturing in the chain. Thus, despite the impact of climate change and diseases outbreaks, they still notch up success. Nguyễn Văn Đông, a member of Cooperative 30/4, shared: “Comparing to the early days, when the Cooperative was just established in 2012, the living standard of the members today are much better; income increases annually; everyone can build grand big houses and have the finance to reinvest in production”.

In this crop, the cooperative has 21 ha of intensive and semi-intensive shrimp farming and the rest is of extensive farming. Ngọc said: “Since the beginning of the crop, the intensive and semi-intensive farming area has produced 40 tons of prawns and the second batch has just been stocked. The extensive shrimp farming area has only produced approximately 10% of its yield; the remaining shall soon be ready to harvest; it has shown good signs”.

The members of Cooperative 30/4 also openly shared that there had been many fruitful results from collaborating with enterprises in the chain but it hadn’t met their expectation. Ngọc explained: “Although both parties have carefully studied each other and discussed thoroughly but there are still some problems while implementing due to the influences of the market. Some terms in the contract have not been fulfilled because everyone wants to maximize their profit and does not genuinely share the benefit for the chain. However, this is a good direction and we are confident in the future, the problems will be regularly discussed to find solutions in order to build the chain more sustainably”.

Currently, the members of the management board of Cooperative 30/4 are focusing on the unity of both the input supply and the product consumption. The goal is to make sure that all members can buy quality products with lower prices, produce shrimps of comparable quality and get a more stable selling price. Accordingly, Cooperative 30/4 has designed an effective supporting plan for members: to negotiate with veterinary medicine, feed and breed suppliers and product consuming partners.

In summary, Cooperative 30/4 is trying to realize the chain linkage and generate more profit and faith for members. Ever since taking part in SUSV project, the cooperative’s members have successfully implemented the clean shrimp farming process by ASC standard, antibiotics and chemicals free. The problem now is to produce shrimps of comparable quality. In order to implement a sustainable linkage chain, Cooperative 30/4 also expects the credit policy to be more flexible under the value chain contracts, creating opportunities for both the cooperative and linked enterprises to access capital easier than before.